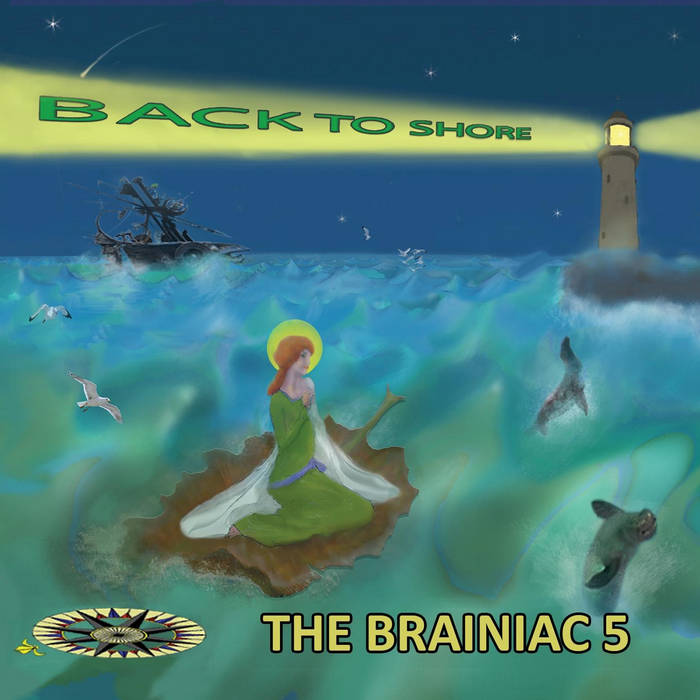 Since reforming The Brainiac 5 have successfully maintained their 1970s core psych/punk tradition but have also shown great willingness to expand their range of styles/influences and to work with a range of guest musicians.
However, with “Back to Shore” this willingness to experiment has been taken a step further.
There are indeed three tracks, Long Enough, What We Can and Breaking Up, that are firmly attached to their roots. But even these, studio recorded by the current band, have Chrissy Quayle, an associate from the early West Penwith days, added.
It is for the quartet of tracks that make up the “Back to Shore” section of this album where the approach has been totally new. For these a simple, hypnotic, looped backing track has been used throughout.
Initially this loop was sent out to past band members and associates together with a few friends, some of whom had never heard the Band. Some vague suggestions were given, but the musicians were encouraged to come back with whatever they fancied.
The response to this proved fantastic, allowing the direction of two tracks, A Woman’s Work and The Seal Man to be quickly established. At this point Charlie Taylor, Woody and Duncan Kerr convened to throw in ideas/contributions and establish provisional arrangements. Now the juices were flowing and the direction for two more tracks, Tribute to Alex Ward and This Way, was established. It was realised that, far from being restrictive, the loop had a liberating effect, allowing the music to fly off in different directions but still sound like a united whole.
As the tracks took shape a few more people were approached to contribute. So, working in this way omit: it has been an amorphous process with everyone involved contributing to the final product, The Brainiac 5 merely giving a guiding hand.
While these “Back to Shore” tracks were being developed Duncan Kerr had been beavering away with his solo track, Elegy, making for another bit of experimentation and blending in perfectly.
There can’t be many albums delivering a punk attitude, with literary lyrics, copious spoonsful of psych. guitar and serious jazz chops all mixed in with jew’s harps, penny whistles, reggae toasting and highland bagpipes.
It has proved to be a fascinating experiment that has thrown up some amazing and unexpected music.

BRAINIACS ON THIS RECORD ARE:

Track 1 lyrics are from “as freedom is a breakfast food” by E.E. Cummings
Lyrics at the beginning of track 5 are from The Seal Man by Rebecca Clarke

Assembled and mixed by Charlie Taylor at Disco 2000, Epping in 2018
Recorded (tracks 1, 7, 8) and mastered by Kenny Jones at Alchemy Studio, Wood Green
Sleeve design by Woodenfield

We have lingered in the chambers of the sea
By sea-girls wreathed with seaweed red and brown
Till human voices wake us, and we drown.
T.S. Eliot

the Brainiacs were a Cornwall-based psychedelic punk band, who came to prominence in 1978 with the wonderful 'Mushy Doubt' EP, a favourite of the late DJ John Peel.

early in 2014 Reckless Records released When Silence Was Sound, a CD compilation of most of their '70s recordings.

their recently recorded 10" vinyl, Space Is The Place, received excellent reviews in Shindig! and The Wire. ... more

Bandcamp Daily  your guide to the world of Bandcamp